How to Identify Procrastination and Stop Putting Off Your Success 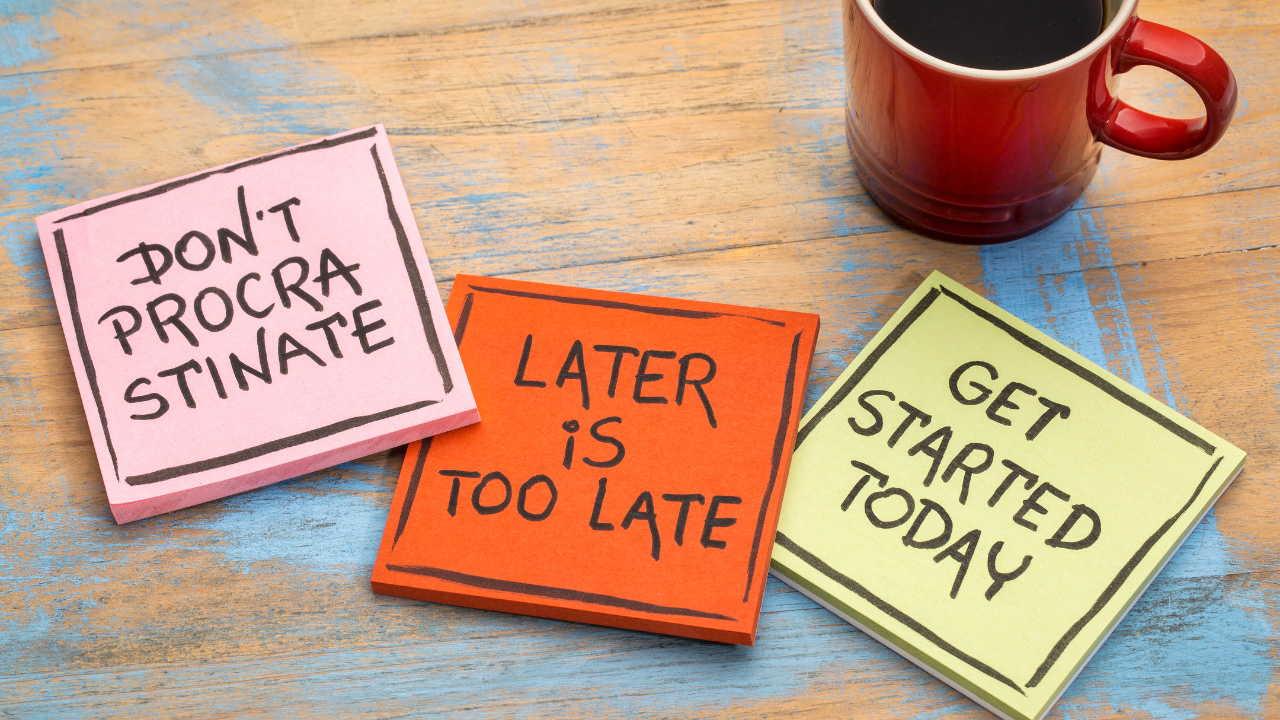 Recently, I had a conversation with a CEO. When we reviewed her performance, she found that she had a packed week of meetings that seemed very productive. However, as we analysed deeper, she discovered that although she had a full week of meetings, she was avoiding conversations that directly related to achieving sales targets.

She realised she was focusing on the easy bits of creating conversations but avoided the more difficult bit which is asking or closing sales. It’s important to note that her company is experiencing losses and it’s urgent that she generates additional income. Procrastination had stepped in resulting in distracted week away from her main priorities.

Although everybody may procrastinate, not everyone is a procrastinator. Dr Joseph Ferrari, professor of psychology at DePaul University found that as many as 20% of people may be chronic procrastinators.

Procrastination is when one chooses to avoid urgent tasks despite negative consequences. It’s a habit that is developed over many repetitive triggers that led to feeling inadequate, overwhelmed or out of control.

Procrastination could show up when you hear :-

I’m really busy.
I’m out for too many meetings. I have no time.
I’m stressed. I’m overwhelmed.
I’ve too much work.
I’m too tired. I’m exhausted.
I don’t feel like it.
I don’t know how to do it.
I don’t want to…

It’s common belief when we hear such responses, to think that the person is having time management issues. However, over the past decade of research with clients reveals that what’s not identified under the surface of these common responses, is procrastination.

When we mis-recognise the problem, we may end up attempting solutions eg training for time management, that do not address the real issue. Hence, prolonging a persisting problem.

Procrastination is a form of self-sabotage. It appears when one tends to focus on less important, more enjoyable and simpler tasks instead.

It can also appear when one avoids tasks that may risk humiliation or making a mistake. This happens when de-motivating psychological factors like fear of failure, perfectionism, anxiety shows up.

It’s probably a good space here to emphasise that there is a difference between procrastination and laziness. Laziness is apathy, inactivity and unwillingness to act ie do nothing. Procrastination on the other hand, is when one actively chooses to do something else.

Why is it critical to recognise and resolve procrastination?

Left unattended, this habit prevents you from reaching your potential. How you do one thing is how you do everything. So, it’s not only affecting work, but in every area of your life. For instance, it

-Impedes health, as one avoids important wellness factors eg going to doctor or getting regular exercise.
-Reduces meaningful relationships where there’s avoidance in addressing real issues.
-May result in job loss, depression and lower self esteem.
-Affects team work and the ability to lead effectively.

What are the key focus areas to self-regulate and stop putting off your success?

Here are 3 key focus areas one can work on to identify and beat procrastination.

1. Deal with being scared

It doesn’t matter what you’re afraid of, whether it’s fear of criticism, failure, not good enough, too good, just be honest and real with yourself. In this internet age, all the tools and resources are within your grasps. You can find any answers, coach, mentor, therapists and solutions on the internet to solve your fears and problems. Find an option that resonates with you. If it doesn’t work the first time, know that you have the power to choose a different option.

SOLUTION
Some suggestions that have helped our clients are:-

– Physical movement – go for a run, dance or any exercise
– Self reflection – journalling, meditation or mindfulness practices
– Accountability partner – someone you respect who will take no nonsense and hold you accountable to your goals.
– Coach or therapist to help work through the layers.

It’s been said that courage is being afraid, but taking action anyway. I think it’s courageous when you choose to stay, face, fight fear head on and work through them.

Once you’ve worked through those fears, you might realise those fears could possibly be False Evidence Appearing Real ( F.E.A.R.) as coined by the legendary Les Brown, Freedom first needs to appear in your mind, before you can experience it in reality. Dealing with what you’re scared of, helps to relinquish those strangle holds on you forever, powerfully free and shifts how you see the world.


2. Focus on Small, Measurable and Near Outcomes that would lead to achieving the bigger goals.

Goals that are clear and specific helps to form a picture in one’s mind. Humans think in pictures and the clearer the picture of the goals are, the higher the likelihood is for them to take action.

For instance, saying “I want to lose weight” is a vague goal. It doesn’t draw a picture as to what and how to get there. Break it down to smaller, measurable steps, a goal define as “go running for 30 mins every Tuesday, Thursday and Saturday” is clearer and more likely to be done.

Create an accountability partnership with a good friend who runs with you or a personal running coach. It will increase likelihood of you doing it consistently. Doing things together encourages that “feel good” factor or the feeling of not wanting to let someone else down if you don’t keep up.

Connecting with your future self and being able to see the ultimate goal or result in your mind helps to motivate taking the first  baby steps and staying on track.

People tend to place a higher value to receiving the reward if they can receive in the near term compared to a longer term. For instance, they would likely choose to take action today for a reward they can receive tomorrow, compared to choosing other tasks that would result in a reward 6 months later, even though in the longer term, it would benefit them more.

So, creating short term goals with immediately felt results are a great way to keep the momentum going.

Self Efficacy is a person’s ability to regulate behaviours necessary to execute performance.

In this instance, it is a person’s belief that they can complete tasks in a timely manner.

On the converse, if self efficacy is low, the person doesn’t belief they can self-regulate themselves and therefore procrastination sets in and it becomes a self prophecy, even in those situations where they actually can achieve those goals.

SOLUTION
The awareness about beliefs around what you are capable of and the fact that you are in full control of your choices, gives rise to hope. What you choose to belief or choose to change your belief to positive and powerful statements of yourself, will help you release your inner talents and potential.

Through repetition of positive and powerful beliefs via self talk, journalling, meditation coupled with reaffirmation of new actions will result in positive self-fulfilling results.

So, there you have it.

I hope you’ve found some practical tips that you could put into use. If you like content like this and would like to be supported regularly, do join our community at our telegram channel.

Paddee Connexions works with extraordinary senior leaders, boards and founders who want to up level their life and business. They are fascinating, passionate and successful, yet whatever is coming next still feels like a really big leap. We help them make the tiny shifts that changes everything. Curious? Drop us a message for a complimentary insights call here.